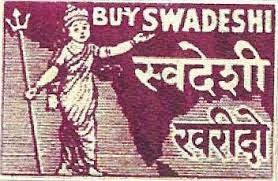 Swadeshi means totally native products whose manufacturing or preparation  require totally native technology as well as native ingrediants.Swadeshi is not a new concept it is actually 80 year old concept which has been realized by our freedom fighter our freedon fighter worked tirelessely to aware people about the importance of swadeshi.the main icons who gave identification to swadeshi were Lala Lajpat Rai,Bal Gangadhar Tilak,Vipin chandra pal Mahatma gandhi and many more at the time of fighting against britishers.

Again people of the nation doing same mistake and going away from their responsiblity  by following and using foreigner product blindly.If we will not prefer indigenous products the time is not so far that we will be under the debt of billions of dollor which itself is in huge amount.
swadeshi means creating national health and wealth you can say concept swadeshi is core of the economy.Following swadeshi means maximum use of indigenous product in daily life.we are suppose to use swadeshi/indigenous products atleast in fmcg which require zero technology.Today there are lot of foreigner companies making revenues and looting our nation in fmcg sector i.e. in zero technology product manufacturing sector. these foreigner companies buying raw material at very lower cost and selling their finished product with 1000-2000% marginal benefits .In beaverage sector they are spoiling our water resources and eating all the margin.

Bengal was the major province in 1900 Under British Empire.Nationalist started raising their voice against British Empire resulting Britishers planned to part the province.When curzon, the viceroy of india announced the partition of bengal in 1905 to break the unity of bengali divided bengal province into two parts east bengal(muslim majority areas) and west bengal(hindu majority areas) and it was their first indication of “divide and rule”. Curzon did this with the motive to check the level of nationalism rising in the people.
At the same time national congress started to oppose the partition and later on this movement turned to swadeshi movement.It was decided to boycott the british goods because people realized the economical crisis when industrial goods of England flooded the indian market because of this several indian village and cotton industries died and then people started to prefer an aware people to buy only made in india products.They burnt british cloth at every street and chowk and started using indigenous products.This movement started in 1905 and continued up to 1911. It was the most successful of the pre-Gandhian movement. Its chief architects were Lokmanya Bal Gangadhar Tilak, Bipin Chandra Pal and Lala Lajpat Rai,Aurobindo Ghosh, V. O. Chidambaram Pillai, Babu Genu.To buy swadeshi products or you can say indigenous products click here